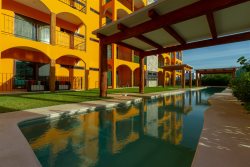 This Contract will only and exclusively be valid for the Property and the Stay Period  identified in the first clause of the Property Vacation Rental contract.

At the time of making a reservation, a first payment (deposit) must be made corresponding to the 50% of the indicated  amount in the second clause, which is the payment amount  for the entire stay.

Any late payments made to the Landlord will incur an additional administrative charge of US $50.00 (fifty US dollars) and/or the cancelation of such reservation and the loss  of the first payment made.

Payments deposited directly to one of the Landlord’s bank accounts,  will not incur any charges. All payments made from abroad must include any international banking charges.

In the event that the Tenant wishes to proceed with a cancellation, the Landlord must be notified in writing (e-mail) and signed by the person who made the reservation and the notification will be effective as of the date that the Landlord receives it.

No cancellations apply for Christmas and New Years.

On the improbable event that is necessary to cancel the reservation by the Landlord, due to unavailability of the property reserved to be rented and it wasn’t possible to offer to the Tenant an alternative with equivalent conditions and characteristics, the Landlord will reimburse the total amount previously paid.

In the event of changes or cancellations due to Major Force Causes, because of acts of war, riots, civil commotion, strikes, disasters, terrorist acts, bad weather, actions of any government or public authority, or any other event public or private out of the Landlord’s control, the Landlord will not be liable in any form or way.

The Landlord reserves the right to modify or remove any reservation due to circumstances out of its control and won’t be liable for any lost, expenses, inconveniences and/or claims for any cause. Landlord’s liability will be limited to reimburse any previously paid amount.

The Tenant is required to give a security deposit to cover possible  expenses caused by damage, loss and/or abuse of the property, its contents, its accessories, furniture, appliances and/or equipment.  The security deposit will be determined according to the period of stay and the property in question.

The Tennant will be responsible for the full costs spent for repairs or purchases of any object(s) to be replaced due to negligence, abuse, accidents, losses and/or damages. The Landlord should be notified immediately of any damage, loss or malfunction, with the understanding that by not doing so, would  be enough reason to hold the security deposit.

V. PROPERTY USE AND CONDITIONS

The period of stay is reserved only for the person(s) specified on the reservation form. It is strictly forbidden for the Tenant to let any other person(s) different from the specified person(s), to stay at the property without the Landlord’s written approval

Some properties exclude electricity or include only some kwh during the stay. Rate depends on the property location and is published on property description.

The unauthorized excess of person(s) at  the Property might result on extra charges, penalties and/or immediate cancelation of the right of stay at the property.

The Landlord reserves the right to terminate the Tenant’s stay at the Property due to bad behavior or misconduct from any of the occupants, their guests, and/or for not following the Condominium Internal Rules of the Property’s complex.

The Property is equipped and furnished for the Tenant’s service and the amount of persons established on the reservation form, and will be inspected and cleaned prior to arrival.

The Landlord reserves the right to retain any amount from the security deposit to cover any additional cleaning expenses.

The Tenant does not acquire any right of any nature, over the Property but its use and enjoyment only during the specified period of stay.

The Property cannot be subleased, nor lent , either  fully or partially.

The Tenant may have guests only during their stay, inside the Property, as well as in the common areas of the complex but not after 11:30 p.m./ 23:30 hrs

The Property should be kept locked during the night and whenever the occupants leave the Property alone.

The Tenant acknowledges to act in such way that no unacceptable disturbances to condominium residents or neighbor properties will be caused.

In the event that the Property is not available at the agreed upon time, the Tenant might be able to leave its belongings inside the property and will allow that the cleaning staff to finish its work as soon as possible, by leaving the property temporarily unoccupied for this purpose.

In the event that the Tenant would like to leave the Property after the time established previously, the Tenant should be requested at its arrival, which does not mean nor should be understood, as an obligation or commitment of the Landlord.

The Landlord reserves the right to retain additional charges from the security deposit, if the property is still occupied after the time previously established.

The Tenant, other occupants and guests will use the common areas and swimming pool under their own risk and will be at all times responsible of their own security and safety, as well as its guests.

The Tenant is responsible to be informed about the rules, specifications and safety precautions that apply at the common areas and swimming pools, before using them and to observe and obey such applicable rules.

No pets are allowed at the Property, unless previous written authorization is obtained from the Landlord.

Unless specified otherwise, property vacation rental includes utilities expenses, such as water supply, electricity, domestic gas, bed linens and towels.  In the event that other supplies are required, they should be requested and paid prior to Tenant’s arrival.

All information supplied and pictures by the Landlord’s staff and through the web page, is as exact as possible according to the conditions that properties are found in. The Tenant acknowledges that some characteristics might change, due to reasons out of Landlord’s control, therefore the Landlord promises to inform the Tenant as soon as possible about the situation, and will not incur in any kind of liability.

The Landlord will not be responsible or liable in any way or form, for wrong interpretations of the graphic and/or written material at the Landlord’s web site, since  all photographs and information presented there are real.  The Tenant should understand that the provided furniture, accessories and/or appliances may not be the same shown on the website due to changes made by the property’s owner and not communicated to the Landlord.

Construction works and/or repairs at neighboring properties, may result in dust and/or noise disturbing for the Tenant at any time of year, therefore the Landlord will not be responsible in any way or form in such event, nor will the Landlord be liable for the temporary cancelation of public and general services, such as water, electricity, cable, satellite, internet, telephone, etc., caused by reasons out of the Landlord’s control.

It is strictly forbidden to smoke inside the Property, therefore in the event of the Tenant doing so, the Landlord reserves the right to retain the security deposit for the expenses incurred in the removal and cleaning of all toxic odors.

Jump to a Rental